The Declaration of Independence recognizes that governments are instituted to secure the rights of people and derive their just powers from the consent of the governed.

The Constitution of the State of Virginia declares:

Article I, Section 2
“That all power is vested in, and consequently derived from, the people, that magistrates are their trustees and servants, and at all times amenable to them;”

Article 1, Section 3
“That government is, or ought to be, instituted for the common benefit, protection, and security of the people, nation, or community; of all the various modes and forms of government, that is best which is capable of producing the greatest degree of happiness and safety, and is most effectually secured against the danger of maladministration; and, whenever any government shall be found inadequate or contrary to these purposes, a majority of the community hath an indubitable, inalienable, and indefeasible right to reform, alter, or abolish it, in such manner as shall be judged most conducive to the public weal;”

We the People declare:

That the political, economic and legal systems of the United States have allowed an elite few to impose policy and governing decisions that threaten the very survival of both natural and human communities;

That the result of those decisions is to concentrate wealth and power through the exploitation of both natural and human communities; while promoting the belief that such exploitation is necessary for the common good;

That our present system of law views all of Nature as property or ‘natural resources,’ enabling unjust legal exploitation, extraction, and pollution;

That the survival of our communities depends on reforming this system of governance by the privileged few with new community-based democratic decision-making systems;

That all government of right originates from the people, is founded in consent, and instituted for the general good;

Therefore, environmental and economic sustainability can be achieved only when everyone affected by governing decisions are the ones who make them;

That for the past two centuries, people have been unable to secure economic and environmental regeneration through the existing minority-rule system, laboring under the myth that we live in a democracy;

That efforts to reform these conditions have often not halted the destruction of our natural and human communities while relying on lobbying the factions in power to make better decisions;

That these endeavors view economic and environmental ills as isolated problems, rather than symptoms produced by the absence of democracy;

That given the control by a wealthy elite over our elected representatives, we have given up hope that our existing systems of local, state or federal government will help protect us from these privileged few. 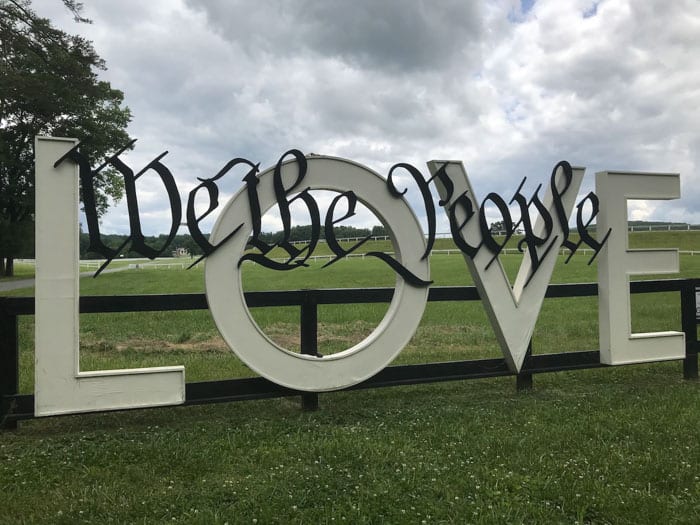 now exercise our inherent and inalienable right to create authentic democracy; we, therefore, call on communities across the state of Virginia to join together in creating a people’s movement to:

Recognize that our very survival depends on a paradigm shift away from our present system of law; therefore, we work to advance the Rights of Nature into law acknowledging that Nature has the right to exist, regenerate, evolve, and flourish;

Revoke the authority of the privileged elite to impose political, legal, and economic systems that endanger both our natural and human communities;

Establish this movement to advance Community Rights and the Rights of Nature into law at the local, community level in the state of Virginia;

Challenge all attempts to subordinate those rights to the rule of the privileged few;

Rescind the legal and political doctrines used by corporate and governmental officers which override community decision-making, leading to harm to the community. These include 1) preemption of community law, 2) subordination of local government (e.g. Dillon’s Rule), 3) bestowal of constitutional rights upon corporations (e.g. Citizens United), and 4) relegating ecosystems to the status of property;

Join with other communities in our state and across the nation in defiance of rights-denying law to envision and build state and federal constitutional structures that codify new rights-asserting systems of governance.

To create a people’s movement to do this work, driving the right to local, socially just, community self-government into the Virginia Constitution, thus liberating all Virginia communities from the legal and political doctrines that prevent them from building economically and environmentally regenerative communities.

A Call to Action: