We were first introduced to the Rights of Nature and Community Rights movement in the Fall of 2017. At that point, Virginia had been center stage for 3 years in the struggle over the proposed fracked gas Atlantic Coast Pipeline (ACP). Most of VACRN founders were on the frontlines in Buckingham County.  We thirsted for the clear, outside-the-box, paradigm shifting wisdom that this global movement presented us.

Buckingham was targeted for one of three super-sized toxic and dangerous compressor stations along the 600-mile proposed ACP, in a predominantly African American community called Union Hill.

We decided to create a Community Bill of Rights that would protect Buckingham’s right to a healthy climate and the rights of the larger James River watershed to exist, flourish, and naturally evolve, and to be free from the toxic impacts of fossil fuel extraction. We worked with Ben Price, community organizer for the Community Environmental Legal Defense Fund (CELDF) to create the James River Natural Community Bill of Rights. To promote this work, we originally formed Buckingham: We the People. 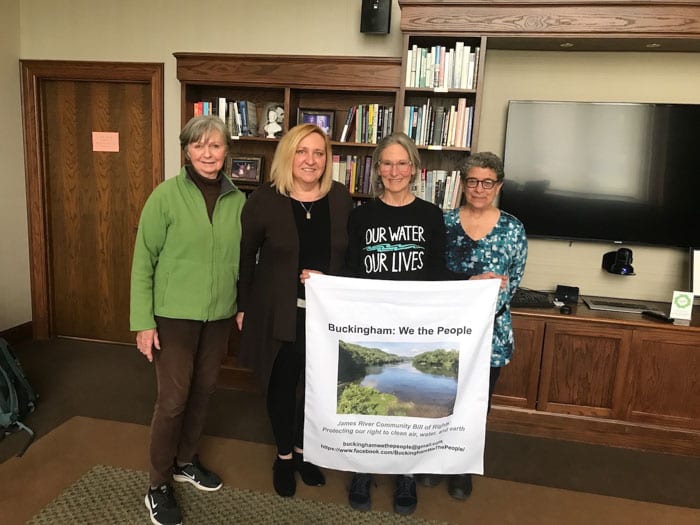 We learned so much by this experience, that we were inspired to host a Democracy School and a Rights of Nature and Nurture weekend for educating and rejuvenating weary frontline ACP activists.

Buckingham: We the People transitioned into the non-profit, Virginia Community Rights Network (VACRN) in Spring 2020. We were invited to team up with other states who comprise the National Community Rights Network (NCRN), all in partnership with CELDF. An NCRN quote sums up our aims: “Rights-based organizing empowers communities to elevate the rights of people and Nature over illegitimate corporate rights that impede local and direct democracy.”

While discovering the inherent dangers of the ACP industrial project, we found our government is structured to promote corporate interests rather than to protect the health and safety of the people, land, air and water. We had thought the government’s responsibility was to represent public interest and protect us from harm. We saw that the true costs of doing dirty business far outweighed the benefits.

This became clear to us in the struggle by the Friends of Buckingham (FoB) and the many allies of the Allegheny Blue Ridge Alliance (ABRA) to defeat the ACP. Here’s what happened in our community to open our eyes to the systemic problem of unfair corporate rights.

In step with what we came to understand as the corporate playbook, we watched as the Board of Supervisors were enticed with the revenue and jobs they were told the massive 57,000 hp compressor would supply, changing zoning rules to accommodate it.

When faced with nearly 100 well-researched commenters opposing the special use permit (with only 4 in favor), the supervisors responded that they would be preempted by the state if they denied the permit, so they might as well approve it. When the process got to the Virginia State Air Pollution Control Board hearings, the air board said that since Buckingham had approved the local permit, this factored strongly for their state level approval. This was a maddening circle game. 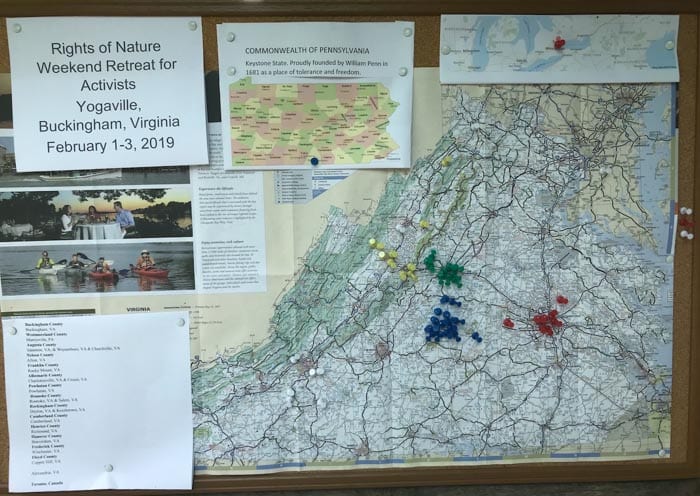 Who can we rely on?

This example, and more, moved us to take on the task of asserting our inherent rights and responsibilities to protect our communities from harm. We must speak for Nature. We work to make our government comply with its foremost, constitutionally-stated, purpose and duty: to represent and protect the majority Commonwealth (from the self-serving greed and myopia of the elite corporate few).

Thus, if corporations have rights – why not Nature?

The ACP finally conceded defeat on July 5, 2020, after 6 long embattled years. But that was not because our government and regulatory system fairly represented the majority interests of we the people and Nature. Nor because Dominion Energy conceded that the project was not beneficial to Virginia. It was largely because the cost was too high, which the coalition had asserted early on. Though there were good progressive elected state representatives that joined our fight to do right and contributed immensely to our success – we the people cannot ever rest our vigilance over corrupting influences.

We have a democracy problem

It was an epiphany for us to come to understand that we don’t just have a pipeline problem (or any other problem), we have a democracy problem. We wrote the James River Natural Community Bill of Rights in response to this frustrating state of affairs. This bill of rights (CBOR), was inspired by the work of other communities across the country.

VACRN recognizes that we cannot rely on state legislatures, regulators and courts to provide the vision that we have for the future.  We came to understand that we need to uplift our communities with empowered thinking and engage elected officials who might be willing to work for systemic change. For a deeper dive, go to the FAQ page.

We realized systemic change is necessary in order to decolonize and decomodify our world; to elevate community rights over “corporate personhood”; whereby corporations have illegitimately received greater constitutional protections and influence over our system of government than the American citizens and non citizens alike. Our work is proactive, to manifest our vision of communities with unalienable rights to healthy ecosystems, living wages, social justice, public health, and to reclaim local self government by driving these rights into law.

VACRN calls upon communities across the Commonwealth of Virginia to unite in a movement to elevate the rights of people, their communities, and Nature above the claimed ‘rights’ of corporations and the elite few. Please read our Declaration.

Under our current structure of law, a corporate minority, in partnership with the state, has control over our community on almost any issue that really matters to us. While our work has focused largely on rural environmental issues, this approach has also been applied to urban and social justice issues. Other state Community Rights Networks have extended their work to provide organizing assistance to groups working on issues such as sanctuary cities for immigrants, campaign finance reform, living wages, worker/labor protections, homelessness, and police accountability.

We are assisted by the Community Environmental Legal Defense Fund (CELDF) working in rural Pennsylvania since 1995. CELDF lead the foundational work which pioneered the global Rights of Nature movement. The National Community Rights Network (NCRN), in partnership with CELDF, was formed in October 2014. We are affiliated with NCRN to support communities in reclaiming their rights to the healthy, thriving, sustainable, regenerative world they envision.